10 facts about Windsor Castle, fit for a king, including...

1. It’s the Longest-Occupied Palace in Europe

The original building was constructed in the 11th century, after the Norman invasion of England. William the Conqueror built it as a fortress, but it has been used as a royal residence since the reign of Henry I, King of England from 1100 until his death in 1135. It is a favourite weekend retreat of the current monarch, Queen Elizabeth II. But around 40 other reigning monarchs have used Windsor Castle as a retreat just outside of London. It was a particular favourite of Elizabeth I. And Henry VIII used it as a giant pleasure dome, enjoying shooting, dancing, wrestling and playing tennis on its grounds.

Windsor Castle has suffered serious fires multiple times over its 1000-year history. But the most recent—and most damaging—occurred not so long ago, in November of 1992. A portion of the castle was undergoing renovations and it was in this area that the fire started. It is thought that a curtain was too close to a construction spotlight and set alight. The fire spread quickly, and 200 firefighters arrived to help tackle the flames. Fortunately, because of the renovation work, many of the adjacent rooms had been emptied of their artworks, furniture and other historical treasures. However, over 15 hours, the fire burned through much of the Upper Ward, destroying nine state rooms and severely damaging around 100 others. The restoration work cost around £67 million in today’s terms. The question of who should pay for the repairs was a complex and fiercely-debated one. In the end, it was decided that much of it would be paid for by opening Buckingham Palace to the public at certain points of the year.

It’s just as well the rooms had been cleared during the renovations, or the country would have lost a fantastic collection of artworks. One of the highlights of any trip to Windsor Castle is seeing the fabulous art collection on display. Masterpieces by Rubens, Michelangelo, Van Dyck and Rembrandt can all be seen during a tour of the many luxurious state rooms, halls and galleries that make up Windsor Castle.

Yep, and it’s one bloke’s job to look after them all. The Queen’s fendersmith (possibly the only person left with that awesome job title) is responsible for cleaning and lighting all 300 of Windsor Castle’s fires. He’s been doing it for decades, taking over from his dad in 1984. It’s a big old job, and it needs to be done with a level of care and attention fit for a Queen, so it hasn’t been subcontracted out as yet.

And again, it’s one man’s job to be in charge of them all. The castle’s horological conservator is responsible for the maintenance of all the historic timepieces. Many of them have outdated, highly complex mechanisms, so it takes a lot of skill to keep them all ticking over. The two busiest weekends of his year are when the clocks change. It takes him around 16 hours to move all of them forward an hour in spring. But moving the clocks back is even more time-consuming. This is because the conservator has to wind them for 11 or 23 hours, rather than just back one. Despite its size, the castle is contained within just the one time zone, which makes it all a bit easier. 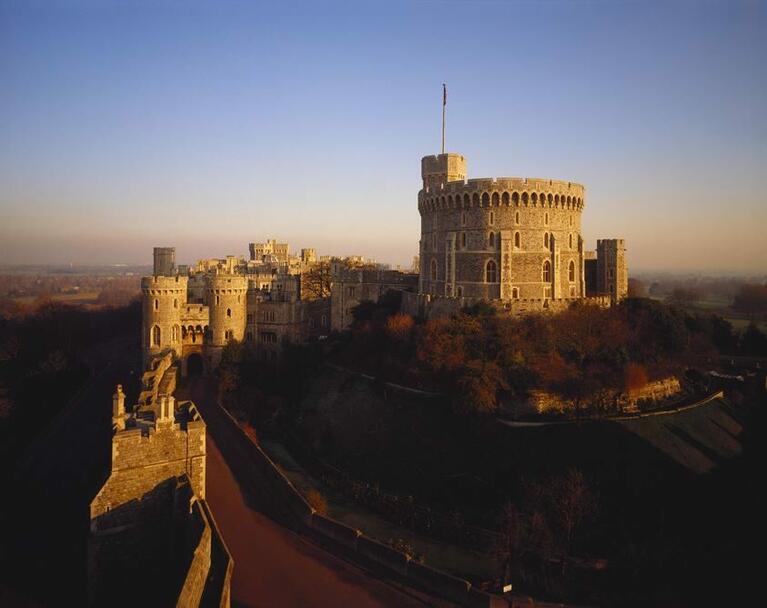 6. The Kitchen is the Oldest in the Country

The oldest working one that is. It’s been feeding the Kings and Queens of England and Britain for centuries and is a huge operation, particularly when the castle is holding a state dinner. And the sense of pomp and ceremony doesn’t make it easy for the kitchen staff: for instance, each little lump of butter has to be hand-rolled and stamped with the royal crown. In order to keep the whole dinner service running efficiently, the clocks in the kitchen are set (by the one bloke, as we now know) five minutes fast.

7. There is a Changing of the Guard at Windsor Castle Too

Just like at the Queen’s other main residence, Buckingham Palace, Windsor Castle has a changing of the guard. Basically, a ceremony that signifies a new group of soldiers becoming responsible for guarding the palace, the Changing of the Guard usually takes place at 11am each day. Try and time your visit to witness this iconic military event.

8. Windsor Castle Attracts Over a Million Visitors Each Year

And you could be one of them, with admission to the castle included with your London Pass. Its most famous visitor (until you show up, of course) is Her Majesty Queen Elizabeth II, who has a long-held affection for the castle. She gets in free as well. Because she, wisely, has a London Pass. It’s her favourite weekend home. She could live pretty much anywhere she wanted…so you know it must be good.

9. The Royal Family Got Their Family Name From the Castle

The current Royal Family is originally of German descent, and their name was previously Saxe-Coburg and Gotha. During the First World War, George V changed the name of their royal house, because of anti-German public sentiment and the name’s highlighting of the family’s German lineage. So the family name was changed to Windsor and remains so to this day. Many assume that the castle is named after the family, but that isn’t so. Unusually in the world of royal naming, it is the building that gave the name to the royals, rather than the other way round. So they’re named after their favourite castle. From now on, please refer to me as Mr Matthew Disney.

There is a 2.65 mile approach to the front door of Windsor Castle. That’s a long stretch to cover before you get inside. Apparently the Queen has to meet all Deliveroo drivers at the gates to the drive. And she’s had flaming rows with Uber drivers who just want to drop her off at the gates and make her walk the rest. Are you big on royal landmarks? You'll want to head over here then.