What is the Churchill War Rooms?

The Churchill War Rooms is a leading London museum that focuses on the Second World War period and one of the most prominent figures of the time, Sir Winston Churchill, Prime Minister of the United Kingdom. The museum is comprised of two parts: the Cabinet War Rooms and the Churchill Museum.

What are the Cabinet War Rooms?

The Cabinet War Rooms are a historic underground system of rooms and passageways that served as the command centre for the British government during the Second World War. Construction began in 1938, with the rooms becoming operational in 1939, just a week before Britain declared war on Germany. They were used throughout WWII, until August 1945 and the surrender of Japan. After the war, the rooms were preserved for their historical significance, but public access was extremely limited. The Imperial War Museum took over the site in the early 80s and opened the rooms to the public as a museum in April 1984.

What will I see there?

The Cabinet War Rooms are rich in history. You’re in the secret location where Churchill and his closest advisors plotted the path to Allied victory. Many of the rooms have been designed to look as they did at the time, with artefacts in situ, including large, pin-marked maps of the battlefronts and the conferences tables laid out, documents and cigar trays at the ready. One particular highlight is the small Transatlantic Telephone Room, which is disguised as a private toilet. Churchill used the room to speak in secret with the American President. This section of the Churchill War Rooms also brings daily life underground to life. There were many workers who spent vast periods of time working, living and sleeping down here, and the museum does a great job at pulling the curtain back on their secretive, hidden existences. Churchill, who was famously not a fan of noise while working, had special ‘noiseless’ typewriters shipped in from the States for all secretaries posted down here. Little details like that really help to bring the tension, the drama, the maddening closeness of the environment and the time into a relatable form.

What is the Churchill Museum part?

It is a biographical museum detailing the life and times of Sir Winston Churchill, British statesman, best remembered for leading the country to victory during the Second World War. Unlike the Cabinet War Rooms, the Churchill Museum doesn’t limit its focus to the WWII period, and instead follows Churchill’s life from boyhood to his death at 90 years of age.

And what can I see there?

Across the 850m2 museum, you’ll see a whole range of audiovisual exhibits relating to the life of the great wartime leader. It’s incredibly interactive, so a far cry from the kind of stuffy museum that’ll have the kids running for the exit. It brings the man’s legacy into sharp relief, along with the times in which he and his reputation were forged. You’ll learn about his lonely childhood, his esteemed military career and both of his premierships. 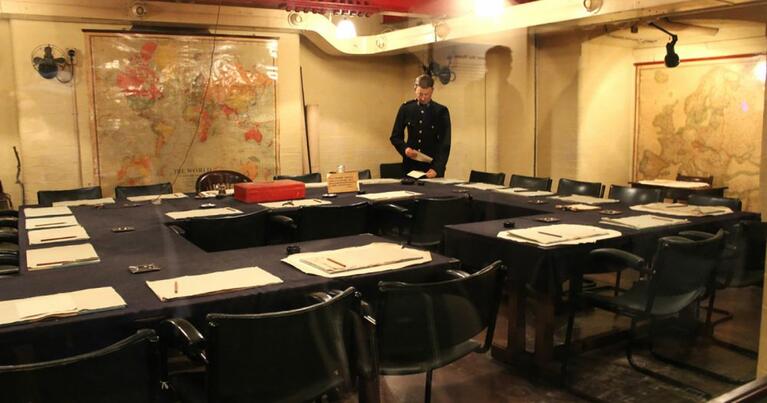 Is there an audio guide?

Yes, there is, and it’s included in the admission price. It guides you along as you tour the underground complex and is currently available in English, French, German, Spanish, Italian, Hebrew, Mandarin and Portuguese. A family guide is also available, as well as a descriptive guide for the visually impaired.

How much does it cost to enter the Churchill War Rooms?

What are the opening times for the Churchill War Rooms?

Is it accessible for people with disabilities?

Yes, which is great. The fact it's underground shouldn’t put you off either. Any ideas you might have of tight spiral staircases aren't true any more. Those with mobility issues are best off entering at the main door via Birdcage Walk, which is next to St James’s Park. The Churchill War Rooms is wheelchair accessible throughout, with a lift to the basement level, mobility accessible toilets and two wheelchairs available onsite for those who may need assistance as they tour the underground complex. For those with hearing impairment, the handheld guide comes with an earpiece, or you can take a paper copy of the sound guide transcript. A descriptive audio guide is available for the visually impaired.

How do I get to the Churchill War Rooms?

Is there anything eat or drink at the Churchill War Rooms?

There certainly is. The cafe at the Churchill War Rooms is open daily from 10am until 5pm. It specialises in, of course, classic British food. And tea. Expect to find homemade stews and soups, as well as home-cooked pies and tarts and a range of seasonal salads. An extensive range of bakes and sweets includes many traditional British recipes that let you taste regional baking classics, such as Derbyshire Bakewell Tarts.

Anything else I should be aware of?

Leave your big rucksacks and luggage back at the hotel or the Air BnB. The museum has no cloakroom or storage facilities. The nature of the attraction, with its narrow underground passageways and historical artefacts displayed in situ, mean you really don’t want to be lugging anywhere around down here.   And that's it for things you need to know before heading to the Churchill War Rooms. Looking for more attractions relating to British icons? Have a look at our write up about Christopher Wren's London.
Tags
London Attractions
Share this post
Copy Email Share Tweet
Previous post