London Neighbourhoods: Our Guide to Southwark

Stroll along the River Thames and discover one of the oldest parts of London with our guide to Southwark!

Welcome to our ‘London Neighbourhoods' guide series, Southwark edition. One of the oldest parts of London, Southwark offers a captivating contrast of traditional and trendy, where historic monuments sit cheek by jowl with modern art and food venues. Until the 1770s, London Bridge was the only river crossing in the city. This gave Southwark, the area around the southern end of the bridge, a unique role for over 17 centuries. Now officially the name of one of London’s 32 boroughs, Southwark’s most interesting sites for visitors are arguably in the riverside areas of Borough and Bermondsey. 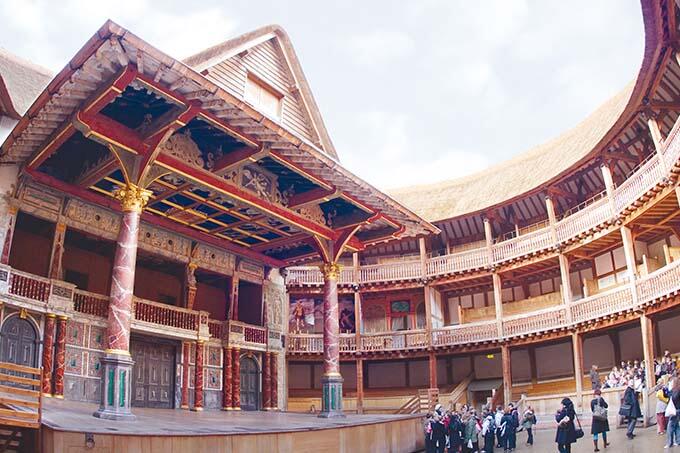 The northwestern part of Southwark is called Borough. Confused about the Borough within a borough? You’re not alone, but the name originally differentiated Southwark from the City on the other side of the river. Bankside is the river promenade where you can find some of Southwark’s most famous attractions: The Globe Theatre An oak and thatch replica of Shakespeare’s Elizabethan playhouse and a working theatre. Come and watch a play from the courtyard for an authentic Tudor experience, although the throwing of rotten vegetables is discouraged. And speaking of authenticity, the first rule of London neighbourhoods is that their names aren’t usually pronounced the way they’re written. To sound like a true Londoner, say SA-thook, not South Wark. Tate Modern Opened in 2000 in a refurbished power station, the Tate Modern is an extension of the original Tate gallery near Pimlico and specialises in international contemporary art. The main entrance is through the enormous Turbine Hall, where special temporary exhibitions are held. The main collections are in the 6-storey Boiler House and the new Switch House extension – all of the Tate Modern is family-friendly, with many activities and a welcoming atmosphere for younger visitors. The Clink The Clink is a former prison and now a museum. It was in use from the 12th century until 1780, although the term ‘the clink’ is still used to refer to prisons in general today. Over the centuries, The Clink housed people accused of a multitude of crimes, from vagrants and debtors, to Royalist supporters during the English civil war, Puritans who went on to become settlers of the New World and many others who found themselves on the wrong side of the prevailing state religion. Golden Hinde Switching back to the Tudor era, a full-sized replica of the ship Sir Francis Drake used to circumnavigate the globe in the 1570s is docked just before London Bridge. Jump aboard to learn more about its fascinating journey and life aboard a galleon. Tower Bridge Built in 1886, Tower Bridge is possibly the most iconic of London bridges. Visit the Tower Bridge Experience to learn about the inner workings of the Victorian engine rooms and to enjoy the beautiful views from the high-level walkways - complete with glass floors. If you’d like to see the bridge opening, please check the Tower Bridge website  for times. 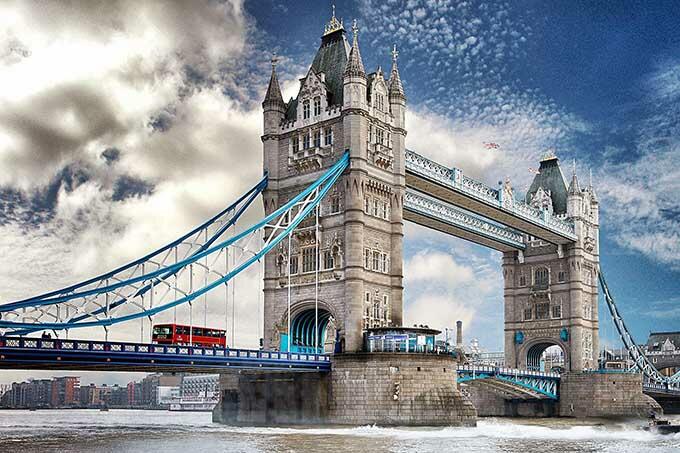 Heading for the Docks

Heading east from Tower Bridge, London’s history as a port becomes more obvious to the eye. Butler’s Wharf was built in the 1870s as a wharf and warehouse complex, but fell into disuse during the 20th century. It now houses luxury flats, restaurants and shops - a lovely place for a bit of a breather.

Working up an appetite

In Geoffrey Chaucer’s 1478 book The Canterbury Tales, The Tabard in Southwark is named as the starting point for the famous pilgrimage. The original tavern burned down in 1669, but in fact the area’s reputation for food goes back even further: Borough Market celebrated its millennial in 2014. If you're on the historical hunt for some of London's oldest F&B establishments, be sure to check out our guide to London's Oldest Pubs for a truly authentic experience. Borough Market truly is a food lover’s heaven. As well as fruit and veg, meat, fish and cheese, there are many stalls offering artisanal foodstuffs from England and all over the world. With many places nearby where you can sit down for a meal, a lunch break in Borough is not to be missed. 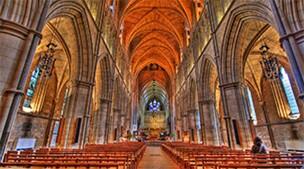 A little way back from the waterfront, Southwark Cathedral has been a place of Christian worship for more than 1000 years, although the building has been severely damaged and reconstructed several times. Following the dissolution of the monasteries by King Henry VIII in the 1530s, it became for a parish church, before being designated a cathedral in 1905. This may account for it being less famous than the big churches across the river. John Harvard was born in Southwark in 1562 and was baptised in what is now Southwark Cathedral. He went to the local parish free school and on to Cambridge University, before migrating to the Massachusetts Colony and famously leaving his library and the residue of his will to the new college there. He is commemorated by the Harvard Chapel, paid for by Harvard University alumni resident in England. Wherever you are in northern Southwark, The Shard will form part of the skyline. Construction of this 95-storey skyscraper was completed in 2012 and it offers the highest view points across the capital. Special experience packages and guided tours are also available! We hope we have shown just how much Southwark has to offer as a London neighbourhood. Wishing you an interesting and entertaining trip!
Tags
Neighbourhood Guide
Previous post

Our Favourite Day Trips Outside of London